It has been a tough month; almost daily thunderstorms with copious rain have become the norm. My garden is a swamp and many hours have been spent in the basement holding Angel, my lovely standard poodle, in my arms as a comforting shield against the sub-sonic power of a thunderstorm. My third (!) blog post, Anatomy of a Thunderstorm, included a recording of an August storm captured on my Zoom recorder. So? 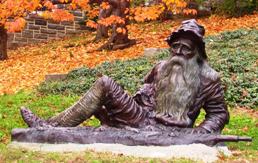 If you haven’t seen me recently visiting your blogs, there is a reason. I am now in my studio, where I have been for weeks, putting the final touches on a large concerto piece for tenor saxophone and orchestra called “Arcadian Tone Poems” (more about that next week!) One of the movements “Playing With Thunder” draws on that recording that I made two years ago. Many myths and stories surround thunder, including Washington Irving’s American tale of Rip Van Winkle with men playing “nine pins” in the sky as well as that of the Greek Elysian Fields, the final resting places of the souls of the heroic and the virtuous, evolved from a designation of a place or person struck by lightening. (see Wikipedia) I prefer to think of thunder as a loud and boisterous conversation between yesterday’s weather hanging around too long and the new front moving in to claim temporary territory . . . or, perhaps a machismo conversation between Thor and Zeus.

So, enough said; I am deep in the completion of “Playing With Thunder” and must return to the task at hand, even though the sound of it seems to be frightening Angel all over again. Here is a link to Anatomy of a Thunderstorm. Be not afraid, it is just an evolving and sometimes raucous conversation event 🙂

33 thoughts on “Playing With Thunder”