Yesterday, the warmth and sunshine of a beautiful April day lingered into evening, a perfect time to work in the garden. I had an agenda, a list – prune the roses, rake the leaves, pull the weeds. I pruned the blackened branches of roses that were damaged by a harsh winter and was delighted to discover green growth at the roots. That was as far down the list as I got. I paused to smell the wind carrying the scent of spring, I watched a pair of robins argue over territory, and my feet wandered over the paths drawn to bits of green and blue and yellow arising from the ground. 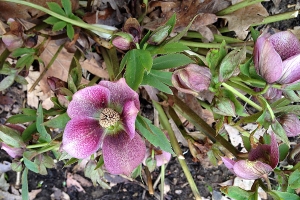 The “to do” list was forgotten and I moved willy-nilly through the garden, meandering, clipping here and there as I went, without plan or order. At work, I am the planner, the doer, the architect of outcomes. But on entering the garden, the plan became a burden that I happily surrendered. I shilly-shallied through a garden lit by golden evening light, my ears open to bird song while my fingers stroked the tender new leaves emerging from the earth. I began to dream instead of plan, I began to imagine instead of control, I began to be instead of act. 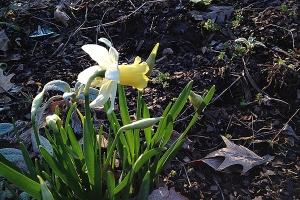 After a few hours of meandering with snippers in hand, caught up in the magic of a gentle spring evening, I discovered that my hands had pruned the hydrangeas, weeded the garden beds and cleared last year’s leaves from the stone steps. The garden was clear of debris and ready to grow. My orderly list of chores was somehow accomplished as part of a relaxed ramble, an afterthought to the real business of connecting with the magical world around me. Perhaps I need a little more willy-nilly time and allow myself to be a dreamer and a sillyheart more often.

“I don’t think I want to know a six-year-old who isn’t a dreamer, or a sillyheart.” ~ Uncle Buck