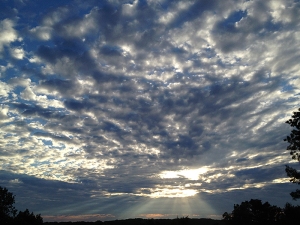 I awoke early last Monday morning, feeling as if I were on the “champagne stage” of the Tour de France, where the victorious pedal into Paris for the last leg of a long race while sipping champagne. I had just finished composing my saxophone concerto the night before; all that was left to do was a little tweaking and formatting. Angel and I took a walk at dawn, witnessing a spectacular sunrise through storm clouds that were passing away, an apt visual metaphor for the intense few months I had spent writing this piece. I was on the champagne stage now – just a few more hours of studio time and I would indulge in a glass of prosecco at the end of the day.

The world changed while I was preoccupied in my studio. I vaguely remember seeing the garden when I came out to visit for an hour or two each day, but my head was full of music and I wasn’t really paying close attention.  Now that I’ve had a week to reorient myself, I’m a bit taken aback. I feel as if I’ve gone through a magical revolving door from the gaudy splendor of the July garden to the mellow pace of August. A few daylily blooms persist but the color banner is carried forward by the large blowsy flowers of PeeGee Hydrangeas, Rose of Sharon, tall stands of garden phlox, the bright daisy forms of Echinacea and Rudbeckia, and the fresh rebloom of roses.

It is now a more relaxed garden, requiring a relaxed

attitude towards the insect damaged leaves of blooming plants and a tolerance for the gradual disintegration of carefully crafted color combinations. The quiet of dusk and dawn have been filled with a raucous chorus of cicadas by day and the bold throbbing songs of tree frogs by night. Flocks of butterflies cover the Buddleia (butterfly bush) by the deck and hummingbirds in two’s and three’s feed on the Salvias nearby.

July has ended, August has begun and their sights and sounds are distinctly different. It has taken me a week to begin writing in words instead of notes, and of raising the camera to my eye once again.  Here are a few portraits of the garden in August. Enjoy, and perhaps join me in a glass of champagne to celebrate the beauty of endings and beginnings. 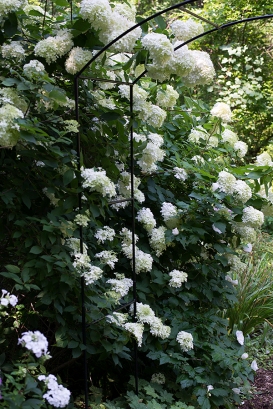 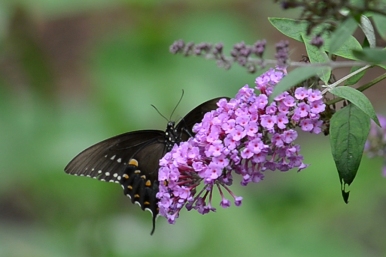 Rose of Sharon and Hydrangea 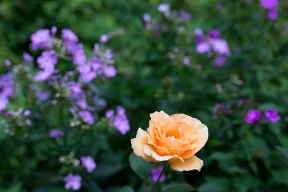 When you’re young you prefer the vulgar months, the fullness of the seasons. As you grow older you learn to like the in-between times, the months that can’t make up their minds. Perhaps it’s a way of admitting that things can’t ever bear the same certainty again. ― Julian Barnes, Flaubert’s Parrot (courtesy of Good Reads)

53 thoughts on “Endings and Beginnings”