Arcadia – a region of ancient Greece that is “a poetic byword for an idyllic vision of unspoiled wilderness.” ~Wikipedia 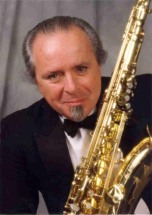 Two weeks ago, Arcadian Tone Poems, a piece for tenor saxophone and orchestra was premiered. It is always an exciting event, to attend the public “unveiling” of something created in the privacy of my studio. A composition never seems complete until it is performed, and what a performance! Our marvelous Duquesne University Symphony Orchestra played with verve and skill under the direction of Jeffrey Turner and, as you will hear, James Houlik’s performance on saxophone is that of a master.

I was asked by the director to create something fun and accessible, with lots of variety in mood and tone color and to showcase the artistry of James, an extraordinary master of the classical tenor saxophone. Immediately the idea of writing a suite of tone poems came to mind, the perfect medium in which to explore the tonal colors of the saxophone and orchestra. 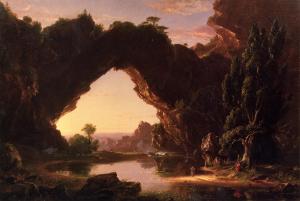 Evening in Arcadia by Thomas Cole

Tone poems, or symphonic poems, arose as a musical form in the 19th century Romantic era of music, and are “intended to inspire listeners to imagine or consider scenes, images, specific ideas or moods.” When searching for a way to feature the classical saxophone in an imaginary landscape, the idea of a pipe or horn being played in the wilderness suggested the role of the shepherd moving through the landscape and describing its beauty through music. “Arcadia is associated with bountiful natural splendor, harmony, and is often inhabited by shepherds” and so the idea for a suite of four tone poems was born.

The program notes from the premiere:

Written to showcase the saxophone artistry of virtuoso James Houlik, “Arcadian Tone Poems” is a series of aural impressions of the mythic land of Arcadia. Ancient Greeks envisioned a pastoral paradise of hills and valleys, mountains, streams, and forests, populated by the ancient gods. Imagine a contest of aerial acrobatics between birds over a meadow strewn with flowers, or a broad flowing river rushing through the mountains, carrying water sprites on the foam. Perhaps Pan, the ruler of Arcadia, is playing a haunting melody deep in a cathedral forest punctuated by columns of light, or Zeus and his sons amuse themselves with a dramatic game of throwing thunderbolts across the hills. Each movement is meant to be an imaginary stroll through a different aspect of this ancient paradise.

Here is an audio file of the complete third movement, “Shadow and Light”  (©2013 Lynn Emberg Purse)

A special thanks to my husband, Bill Purse, for his formidable skills as audio engineer and producer in the process of mixing and mastering the concert recording.

Read more about the creation of Arcadian Tone Poems in Playing With Thunder.

Last night, the Washington Symphony Orchestra performed “Sketches of America” as part of their “Picture This” concert. Under the creative and enthusiastic guidance of Music Director Yugo Ikach, the WSO is a community orchestra, which means that the majority of the musicians are volunteers and participate for the love of performing music.  “Sketches” was originally written for and performed by the Duquesne University Symphony Orchestra featuring professional soloists, including reknowned jazz trumpeter Sean Jones.  I wanted to hear how the WSO would perform the piece, with very little input from me other than the written score.  Would it work?

The title “Sketches of America” was a play on Miles Davis’ “Sketches of Spain”  which itself was a jazz interpretation of Rodriguez’s Adagio movement of the “Concierto de Aranjuez.” I was commissioned to create an orchestral piece that would include a section for jazz improvisation by the soloists, a somewhat daunting task in orchestral writing.  My own goals were more complex – I wanted to draw on American musical traditions as well as musically reflect on my love of the American landscape.  The strains of “America the Beautiful” kept running through my head as I was composing, and a few fragments of the melody crept into the piece as well.

The first section of the piece, “the painted desert” draws on minimalism, a uniquely American approach to “concert music” typified by composers like Terry Riley, Philip Glass, and John Adams. Inspired by a long November drive through the deserts of Arizona, a panorama of grey skies, yellow flowering shrubs, and tumbleweed, I remember a vast quiet world marked by the rhythmic turn of the car wheels. (The full version of “The Painted Desert” was used in my “Autumn Minimalism” post, in the video soundtrack)

That repeating rhythm segues into the syncopation of “a joyful blues” – another American musical tradition in the form of jazz and blues. Not content to write the traditional twelve bar blues in 4/4, I constructed a thirteen bar blues in 5/8 meter over which the solo trumpet and trombone improvise to the fast rhythms of  the pizzicato strings. Those seemingly odd numbers are part of the Fibonacci number sequence, something that occurs throughout the natural world in the form of flowers, seashells, and trees.

“Sketches” closes with a chorale style section based on “Clay”, a song that I wrote in response to my efforts to dig and amend the clay in my garden. One of the lyrics, “. . . the solid ground beneath our feet” became a metaphor for the natural beauty of our vast country and the challenge of keeping it “America the beautiful.”

The WSO performance?  Wonderful. The piece worked, the orchestra sounded great, the soloists rose to the challenge, and the effect was just as I had intended.  That moment of hushed silence in the hall at the close of the piece, the sign that the audience was listening and involved, seemed more important than the applause that followed. Those of you who are composers know that this does not always happen!  As my husband and colleague remarked later, “the piece played itself.”  It was an unexpectedly moving experience and I was touched to the heart, and at that moment, I was very glad indeed to be a composer.

(The recordings above were taken from the premier of “Sketches of America” performed by Sean Jones, trumpet, and Ed Kocher, trombone, with the Duquesne University Symphony Orchestra under the direction of Sidney Harth.)

All music and text in “Sketches of America” ©2011 Lynn Emberg Purse, All Rights Reserved

Fair Use of this Blog

Welcome to Composer In The Garden. If you like what you see or hear or read, I am always delighted to be quoted or linked to, joining the community of bloggers who abide by Fair Use guidelines. However, please refrain from reblogging my posts. Many thanks in advance.

My Sites on the Web